Home Blog A Week in Burgundy 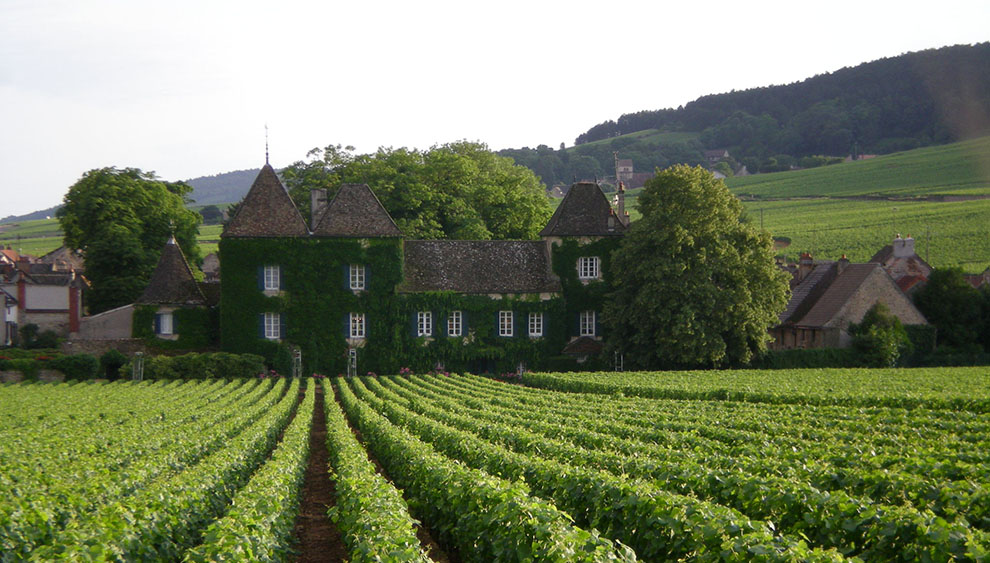 A week in Burgundy, where to begin except at my arrival, it was snowing lightly. Unusual in March as if to really emphasize the vagaries of the weather that the Burgundians have to contend with.

I had been in Burgundy the previous year and only a few weeks later in the spring and I got a sunburn eating lunch outside in Chablis, sadly frost struck soon after that sunny outdoor lunch and terribly effected the 2017 vintage.

We started with snow and ended with the sun but regardless the wines all showed light and freshness. What will be a sadly small and expensive vintage by the time it makes its way to California but the quality across the board was outstanding.

Our first visit with Blair Pethel at Domaine Dublere was a clear foreshadowing of the week ahead, beautiful and well-balanced wines but in a very small quantity. Blair was battling the flu when we visited him but he kindly still had us to his domaine. The reds were showing lots of plum fruit and spiced red currant with pretty floral acidity, perhaps with the exception of the Beaune En l’Orme which had a much more brooding character. The whites showed a lovely through seam of acidity, the Corton having the most round lush mouth.

On to Thomas Bouley, we were tucked into a warm new, very new, tasting room while it quietly continued to snow on the vineyards surrounding his domaine. The wines again showed very fine, lots of elegance even on a leaf day. His Volnay were sadly very effected and he ended up making a single wine out of what is normally three cuvees with vines ranging from 38 to 75-year vines labeled under simply Vieille Vignes, even in its infancy it showed a lot depth and power.  The Clos la Cave was the feminine counterpoint with the 50% whole cluster but with more red fruit and softer aromatics.

Of all the Volnay’s the one that really struck me was the Carelle Sous la Chapelle 1er, the combination of plumped dried cherries and black tea leaves with very fine tannins was mouth-filling and generous without being blousy. His Pommards were also showing very well with darker bluer fruit and a bit more strength in the bones, the Les Rugiens 1er from Les Rugiens-Hauts had really compelling clove, black plum skin and mineral that was also a stunner on the nose. Thomas really was able to show us on maps and bit out of the window how the aspect and soils of the various parcels really have such a huge impact on the wines, even if geographically they are very close. He is also working in a very low intervention style and practicing a very interesting technique of pruning that is really a practice of very little pruning, leaving the apex and hand bending each vine. He won’t be the last we speak to about this method, one that seems to really transfer a lot of vitality into the wines. I promise I won’t go on and on about each producer.

Benjamin Leroux was next and he also had the same acid thread that Dublere did, the Meursaults while having a lot of concentration weren’t overblown and had really interesting spice notes. His reds were more open and had softer edges showing red fruits and florals that will be lovely on release. In contrast to the previous homey visits, Bonneau du Martray was much more formal and stylized in presentation, the whites were big and concentrated with lush stone fruit and hazelnuts.

Charles Lachaux at Domaine Arnoux-Lachaux is the new guard, it was his 29th birthday, and he’s taking the vineyard management into a new direction, he actually is good friends with Thomas Bouley and also work the vines in a similar way for some of his holdings. The wines were polished and very well made, the Vosne Aux Reignots 1er which was an example of a parcel of untrimmed bent vines that showed as one the best for me. It really had more energy and unique rosehip and Ceylon tea characterize that was quite different from some of the more traditionally managed vines. Going from polish to a high shine with Louis-Michel at Comte Liger-Belair, the family history alone is very impressive complete with massive family oils lining the entry stairs. The important work in the vineyard and cellar creates wines of amazing longevity and complexity with wines meant to be laid down.

The La Romanée, the shocker, was brilliant with not a quite cherry fruit but the air in your mouth after you chew and swallow, a prosaic way of saying it was ethereal.  Obviously, he has plans for the family lineage to continue into the misty future. My personal fan girl visit with Fredy Mugnier was one of the most anticipated visits of the trip and it didn’t let me down even a little bit. Starting with the Chambolle from one of only three barrels rather than the normal twenty, a stunning example with a hard to achieve balance of perfume and Sauvage. The wines truly sang, all of them.

I could go on and on but as it would get boring fairly quickly I’ll resist, but the Bonnes-Mares oh man I could live on that wine. He was a lovely speaker and is able to wear the history and gravitas of the region and his wines with a lovely lightness. He talked about bringing happiness and how he is so happy himself that this is what he gets to do, he’s a really special person.

Virgile at Lignier-Michelot was perhaps the most surprising visit, his wines were remarkable. Chambolle Vieille Vignes 2016 but in a very different style grounded rather than floating, almost Christmas with baking spices, warm and earthy. His Morey-St-Denis’s ran a gamut from meaty and savory to bright cranberry and wild strawberries.

Pascal at Domaine Gerard Mugneret was another anticipated visit that did not let me down with Vosne Romanée wines that had blackcurrant fruit with very Bay Area bay leaf and eucalyptus that I think I am genetically programmed to like.

At Pataille we tasted in cellar the wines I most often actually get to drink at home, Marsannay being a bit financially easier to live on than Bonnes-Mares.  The visit was a wonderful chance to taste the cuvées side by side, really showing their sibling relationships. I got quite a lot of citrus and orange peel from many of the wines but then each also had its own personalities as well.

Tomoko at Chanterêves was a wonderful personality that translated into the wines, the most idiosyncratic of our trip.

German Riesling and Syrah Vin de France made in Burgundy, why was my first question which she was able to eloquently answer.

However, the wines that were the most compelling were the wines from Burgundy, particularly St Romain which had a pleasing quince and heirloom apple quality. Paul at Comte Armand is a domaine that makes truly great wines, none the less I could drink his Aligoté with almost anything.  It’s pure pleasure. The vertical of Pommard Clos des Epeneaux was an amazing opportunity, they showed a very clear picture of development from 2000 up to 2016 when they lost 70% of their crop.

Domaine Parigot, a wine I felt I was familiar with and learned that I knew very little.  I know I’m far over the word limit so I’ll just say hand riddling and three years (sometimes under duress only two) in bottle before release! Frédéric Lafarge’s wines are the benchmark, for a good reason. But what was so interesting is how they’re still making small changes and striving to increase quality and try new techniques. The wines all showed as beautifully as is expected from this iconic domaine.  The Beaune Clos de Aigrots 1er being a dark horse winner for me both in white and red.

Camille Giroud is in the tricky position of transitioning from Dacid Croix, who is one of the most exciting young winemaker sin Burgundy to new hands with Carel and he has done an admirable job in keeping the fine quality of the wines while still putting his own stamp on them. We tasted the 2016’s that he made with David and they all showed their sense of place and terroir very well, which is a challenge for such a diverse line up in a négociant house. This tasting will also always have a place in my heart for Paul’s comment about cold Burgundy. Some of the lesser acclaimed regions were definitely outperforming, the Bourgogne Rouge, Santenay La Comme 1er and Marange Le Croix Moines 1er for example. AF Gros was a total departure stylistically with poached fruit, tobacco notes, and broader fruits.  A juxtaposition from many of the tenser linear wines of the week, but something that is accessible to put on a table at release. Armand Heitz-Lochardet was also more of the plummy, graphite and whites with heft, offering a bridge from the California drinker all the way over the pond.

Ok, I hope you were able to skim some of that, it was selfish really as writing helps me really solidify all of my thoughts.  Burgundy is the rabbit hole, and every time is a totally new adventure.  The singularly most important part of visiting the region and meeting winemakers is to put it all into context and connect who is where and why.  It’s an endless opportunity for learning, never the same and always evolving.  Once a personal connection is made whether it’s with a winemaker or a vineyard that will also be there when you drink the wine anytime moving forward.  For a restaurant professional the importance is that hopefully this sense can be translated to a table and they can have just a bit of what it means to be in Burgundy with the people who make the wines.