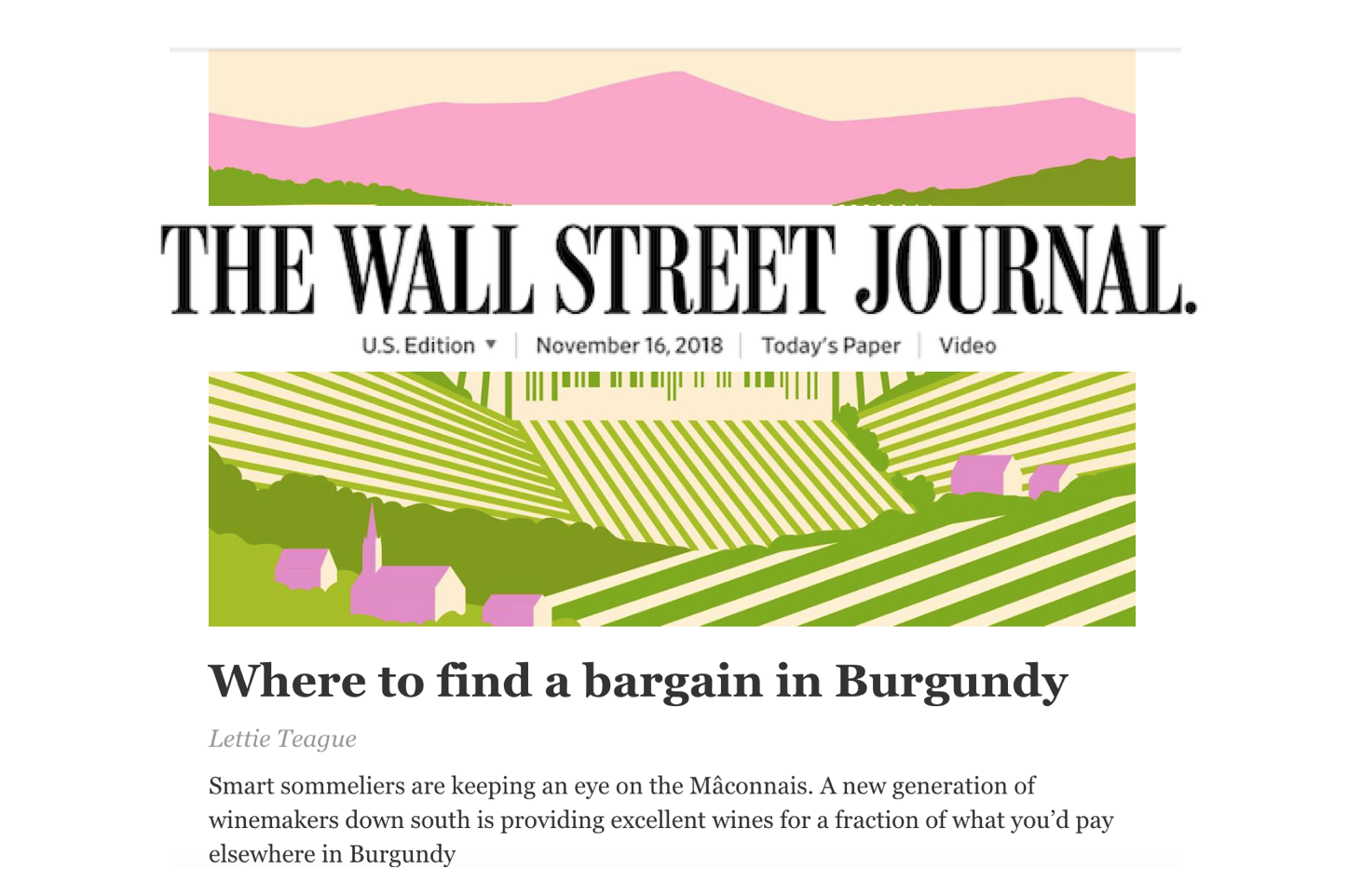 WEC Teaching Scholar Peter Wasserman was interviewed by the Wall Street Journal in connection with WEC seminars he conducted in Dallas, Los Angeles, and San Francisco. Mr. Wasserman, a native of Burgundy and son of wine legend Becky Wasserman, described how his classes helped focus attention on the Mâconnais region of Burgundy, where he reports that top quality Burgundy is still available at reasonable prices.  The Wine Education Council lectures traced the history of the region and guided students through a critical evaluation of today’s top Mâcon producers. The Journal article was entitled Where to Find a Bargain in Burgundy and appeared on November 16. 2018.

Where to Find a Bargain in Burgundy

Smart sommeliers are keeping an eye on the Mâconnais. A new generation of winemakers down south is providing excellent wines for a fraction of what you’d pay elsewhere in Burgundy

AT LEAST ONCE A WEEK I wander around wine shops and randomly select bottles that I know nothing about. I never pay more than $30 a bottle (my vinous risk ceiling), and more often than not the gamble pays off. Sometimes I even find a great deal, like the 2016 Domaine Lapalus Mâcon Milly-Lamartine that I bought for $15 last month.

The price wasn’t a surprise—Mâcon and Mâcon-Villages wines have long been some of the cheapest in Burgundy—but the quality was. Mâcon wine is often simple, mass-produced stuff. Yet the Domaine Lapalus was a crisp white with lively acidity and a pleasant mineral note, so pleased I went back, bought several bottles and decided to explore the wines of Mâcon a bit more.

Mâcon and Mâcon-Villages are two of the broadest appellations within the Mâconnais district, a Burgundy subregion named for its principal city, Mâcon. This place is closer to Beaujolais in both climate and spirit than it is to the Côte-d’Or. Vineyards in the Mâconnais have never been ranked in the same way those in the Côte-d’Or are, with premier- or grand-cru status; the better wines tend to come with the name of one of 27 designated villages appended to the name on the label—for example, Mâcon Milly-Lamartine or Mâcon-Verzé. There is even a town named Chardonnay—for which the grape was supposedly named—hence Mâcon-Chardonnay.

Chardonnay is the key grape of the Mâconnais and the source of the vast majority of its wines, including its most famous ones, Saint-Véran and Pouilly-Fuissé. The latter actually enjoyed some popularity back in the 1970s and ’80s, though most of the Mâconnais wines available stateside at that time weren’t very good.

Back then in Mâcon and Mâcon-Villages, few grape growers made their own wines; instead, they sold their fruit to winemaking cooperatives more interested in quantity than quality. The appellations are only just beginning to overcome their low-rent reputation, thanks to the new generation of winemakers who have taken control of their family vineyards, with a focus on making their own quality wines.

The Mâconnais appellations got a further boost from Dominique Lafon, winemaker and scion of Domaine des Comtes Lafon, the famed Meursault estate that produces some of the priciest, most sought-after wines in the world. In 1999, Mr. Lafon went south to Mâcon and the village of Milly-Lamartine, where he bought an estate and renamed it Domaine des Héritiers du Comte Lafon.

Domaine des Héritiers du Comte Lafon and Domaine Olivier Merlin, in La Roche-Vineuse, became talent hubs over the years, nurturing and launching some of Mâcon’s best winemakers. There are many connections between the two domaines. For example, Domaine des Héritiers du Comte Lafon winemaker Caroline Gon was introduced to Mr. Lafon thanks to Olivier Merlin, who also employed her future husband Frantz Chagnoleau…who was working at Domaine Olivier Merlin when they met. The couple started their own winery in 2010 with help and encouragement from Mr. Merlin and Mr. Lafon, as well as local winemakers Nicolas Maillet, Jean-Philippe Bret, and Jean-Guillaume Bret. “It’s a little world here in the Maconnais, and everyone knows each other and helps each other,” wrote Ms. Gon in an email.

There are other well known Côte-d’Or names producing wines in Mâcon, including the highly regarded Maison Joseph Drouhin. Under the direction of winemaker Véronique Boss-Drouhin, the winery produces a basic Mâcon-Villages bottling as well as two village-specific wines: Mâcon-Lugny Les Crays and Mâcon-Bussières Les Clos.

I discovered the 2016 vintage of the latter at DB Bistro Moderne in Manhattan and was so impressed by its lithe acidity and floral nose, I wanted to buy a few bottles retail. Alas, that was impossible. Raj Vaidya, head sommelier for Daniel Boulud’s Dinex Group, told me the restaurant group had received an exclusive on sales in the U.S.

Perhaps the best way to sell Mâcon wines is to emphasize their excellent price-quality ratio.

Ms. Boss-Drouhin told me she particularly loves the location of the Bussières Les Clos vineyard, a high-altitude site that “gets both sunshine and air,” so the fruit ripens evenly and well. Although the Drouhins make multiple Mâcon bottlings, they don’t own vineyards there—yet. “It is definitely an area we like very much,” said Ms. Boss-Drouhin. “Unlike in the Côte-d’Or, the prices are still reasonable.”

Does the Mâconnais of today—with its fraternal-minded winemakers and affordable prices—resemble the Côte-d’Or of 50 years ago, before the wines became stratospherically priced and the top domaines were purchased by billionaires? I put this question to Becky Wasserman-Hone, an American wine exporter who has lived in Burgundy for five decades and helped bring some of its best wines, including those of Domaine des Comtes Lafon, to the attention of wine drinkers in the U.S.

Ms. Wasserman-Hone didn’t find many similarities between the two places—she noted that the Mâconnais doesn’t have grand-cru vineyards, though she further acknowledged that it has much young talent and promising terroirs. “Mâcon is news these days,” she wrote and further pointed out that her son, Peter Wasserman, is holding tastings of Mâcon wines in the U.S. to help spread the word.

I reached Mr. Wasserman as he was preparing to leave for a wine seminar in Los Angeles. He splits his time between New York and Burgundy and has seminars scheduled in cities across the U.S. this year and next. In each, he presents 8-10 wines from the Mâconnais to wine professionals, usually in groups of 20-30, mostly on behalf of the nonprofit Wine Education Council. He said he hopes to “change people’s minds on the Mâconnais,” as it has “not gotten its due and needs champions.” Audiences, he said, have been “googly-eyed” at the quality of the wines.

Of the 14 Mâcon bottles I tasted, only a few were duds. By and large, the wines were very good and the prices reasonable. In addition to the five featured below, there were a few others of note: the minerally 2016 Bret Brothers Mâcon-Villages ($28), the lively 2016 Louis Jadot Mâcon-Villages ($13) and the light-bodied, charming 2016 Cave de L’Aurore La Fleur de Lys Mâcon-Villages Chardonnay ($15).

Perhaps the best way to sell Mâcon wines is to emphasize their excellent price-quality ratio. Their producers have more than earned a moment of attention and praise.